LOCATED IN THE HEART OF IRELAND

Castlecor was described by Casey and Rowan (1993, 187) as ‘perhaps the most unusual building of the eighteenth-century anywhere in Ireland’.

The house retains all its original features and the large octagonal “Great Hall” has architecture on the very grandest scale.

The construction of this magnificent residence, as it stands today, spanned 300 years, originally built in the mid 1700’s as a Hunting Lodge with additions in the 19th & 20th century.

A freestanding Motte Castle was located at the site of Castlecore which is still evident in the significant elevation in the landscape lying to the rear of Castlecor house.

The inspiration for Castlecor’s distinctive octagonal block around its central chimney stack with four individual fireplaces and over- mantle mirrors is not known.

The National Inventory of Architectural Heritage (www.buildingsofIreland.ie) in their appraisal stated that “The Octagonal room must rank as one of the most unusual and interesting rooms built anywhere in Ireland during the eighteen century”. “The building is a most important historic structure and is of great significance for the study of architectural history in Ireland and, in particular for continental sources for design”. 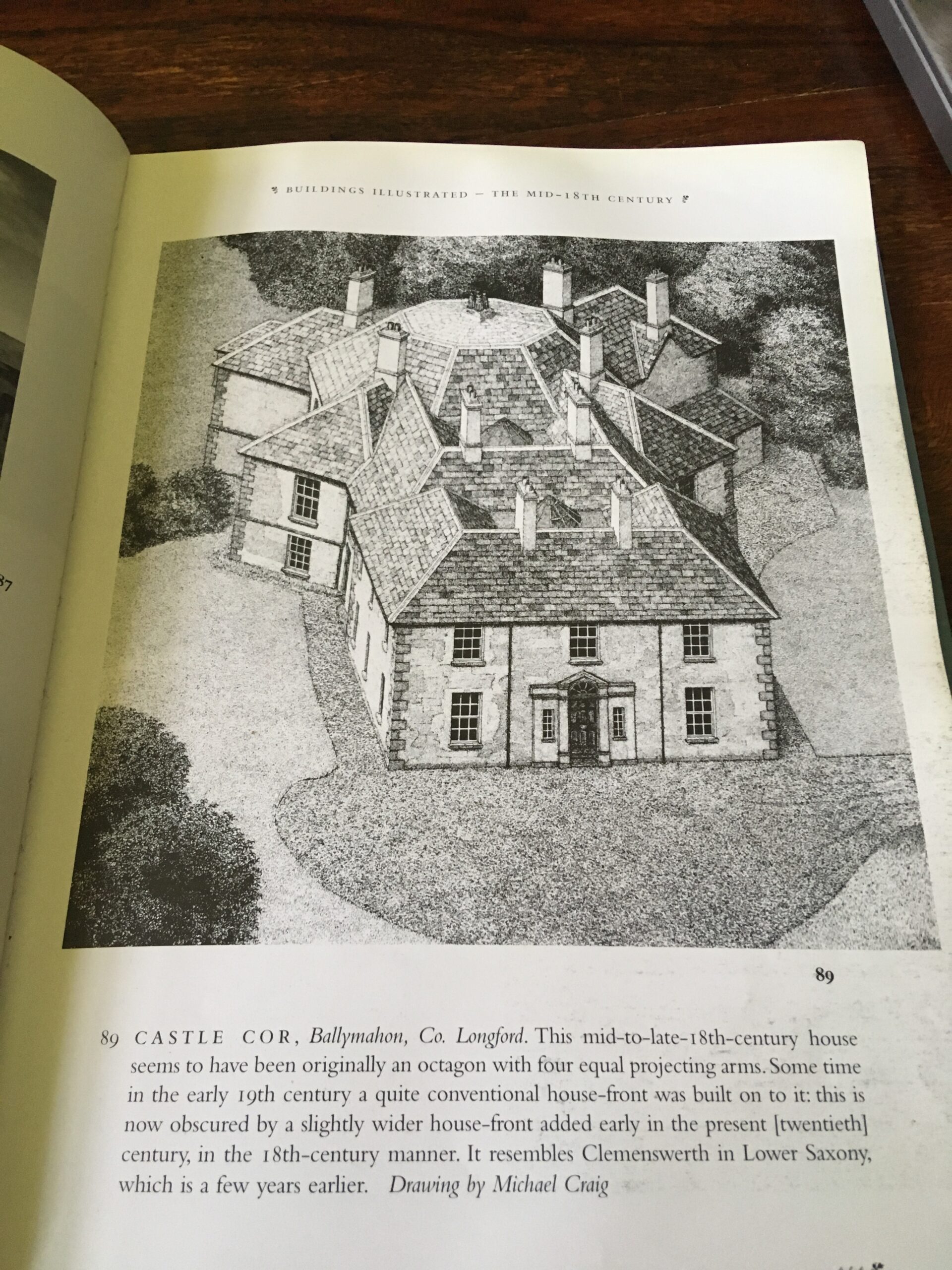 The Rev. Cutts Harman who had Castlecor built died without issue, it was inherited by his niece’s son, Laurence Harman- Harman, later Lord Oxmantown, and finally Earl of Rosse. Peyton Johnston, the Earl’s nephew, rented the house during this time. Captain Thomas Hussey, Royal Marines; purchased Castlecor in c.I820. There is very little documentary evidence relative to Captain Hussey’s occupancy. He resided there from 1832/3 to 1856 and was High Sheriff of Longford.

The first addition to the house was around 1855.
In 1856, Castlecor was sold by the Commissioners of the Encumbered Estates in Ireland to David Dunlop Urquhart of Fair Hill, Lanarkshire, Scotland. The sale included the Mansion, Farmyard, Farm Buildings, and 268 acres of land.

In 1858, Thomas Bond of Edgeworthstown became the owner and it was subsequently passed to John Bond and then Smyth Bond who married Marion Selina Emily Campbell and was eventually inherited by their only child, Emily Constance Smyth Bond who married Captain Charles James Clerk in St Patrick’s Cathedral, Dublin July 2nd 1901. He was Scottish and they had the second large addition built, in 1913.

During the ‘War of Independence’ they had an auction of all the contents of the house at Castlecor in September 1921 and sold the house to a local family, Hugh Mulvihill in Nov 1921/23.

“In 1946/7 it was bought by a religious order, the Ladies of Mary from California, (now known as Daughters of Mary and Joseph) and became the Rosary Convent for Novitiates, the girls called themselves, the Castlecorites. The schools in California needed more nuns so they looked to Ireland for recruitment. It closed in August 1973.

In 2009, the current owners set about purchasing the house. With the aspiration to restore Castlecor House, its grounds, native woodland and walled garden with pond & orchard to its former glory.”

Enjoy Ireland's Hidden Heartlands with us